In April of 2015 when I was feeling particularly entrepreneurial, I launched an online store as a side project.

I invested a significant amount of time and money into this project that I count as a failure. Here, I’ll look back on what happened. Even if I didn’t gain untold riches from this venture, I’d like to believe I learned a lesson or two. 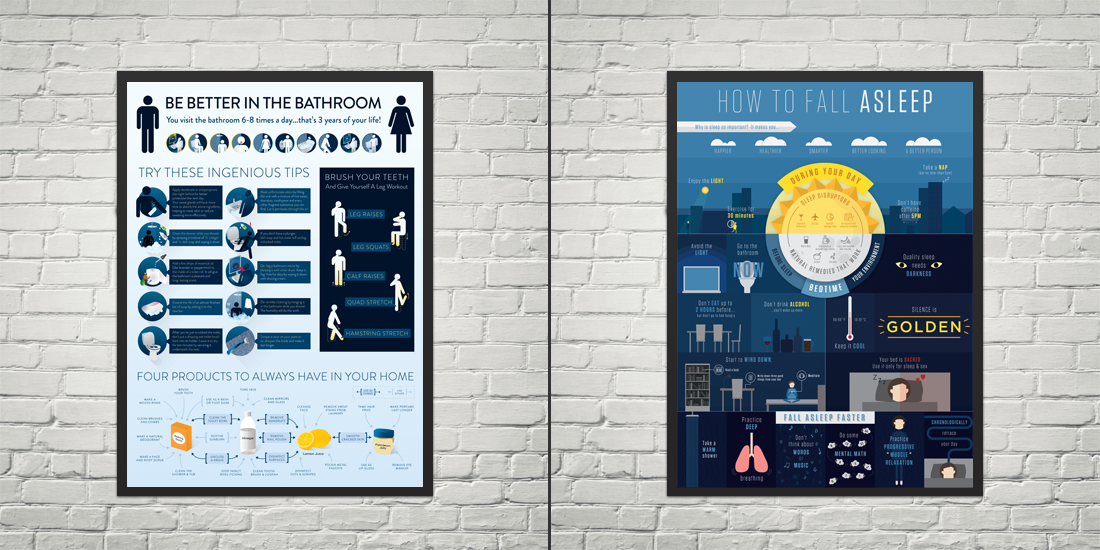 My thinking behind LifeHackPosters.com (don’t bother visiting that URL, the store is gone) was to sell well-designed posters to modern, internet-loving consumers. By having these posters hanging in a home or office, I believed they would be interesting conversation pieces that people might learn from.

I was pretty obsessed with life hacks, reading sites like Lifehacker.com religiously. While I was often fascinated by a life hack, I rarely put the tips into practice. Until one day, when I was particularly captivated by a post about exercises you can do while brushing your teeth. I wanted to make this a real habit, so I drew the exercises on a post-it and stuck it on my bathroom mirror. The first life hack poster was born. 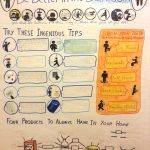 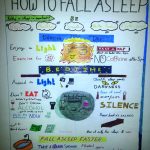 I spent a long time ruminating on the idea and I felt excited about it. The excitement never went away, so I convinced myself it was worth working on.

In January of 2014 I bought the domains lifehackposters.com and lifehackingposters.com. In April of the same year, I bought a sketch pad and got to work.

I researched how to set up an online store, I chose a printer, and I started sketching designs. I decided to launch with two posters and contracted two designers to turn my hand-drawn creations into professionally-designed prints. I was pretty happy with how they turned out and it felt cool to see my ideas come to life. 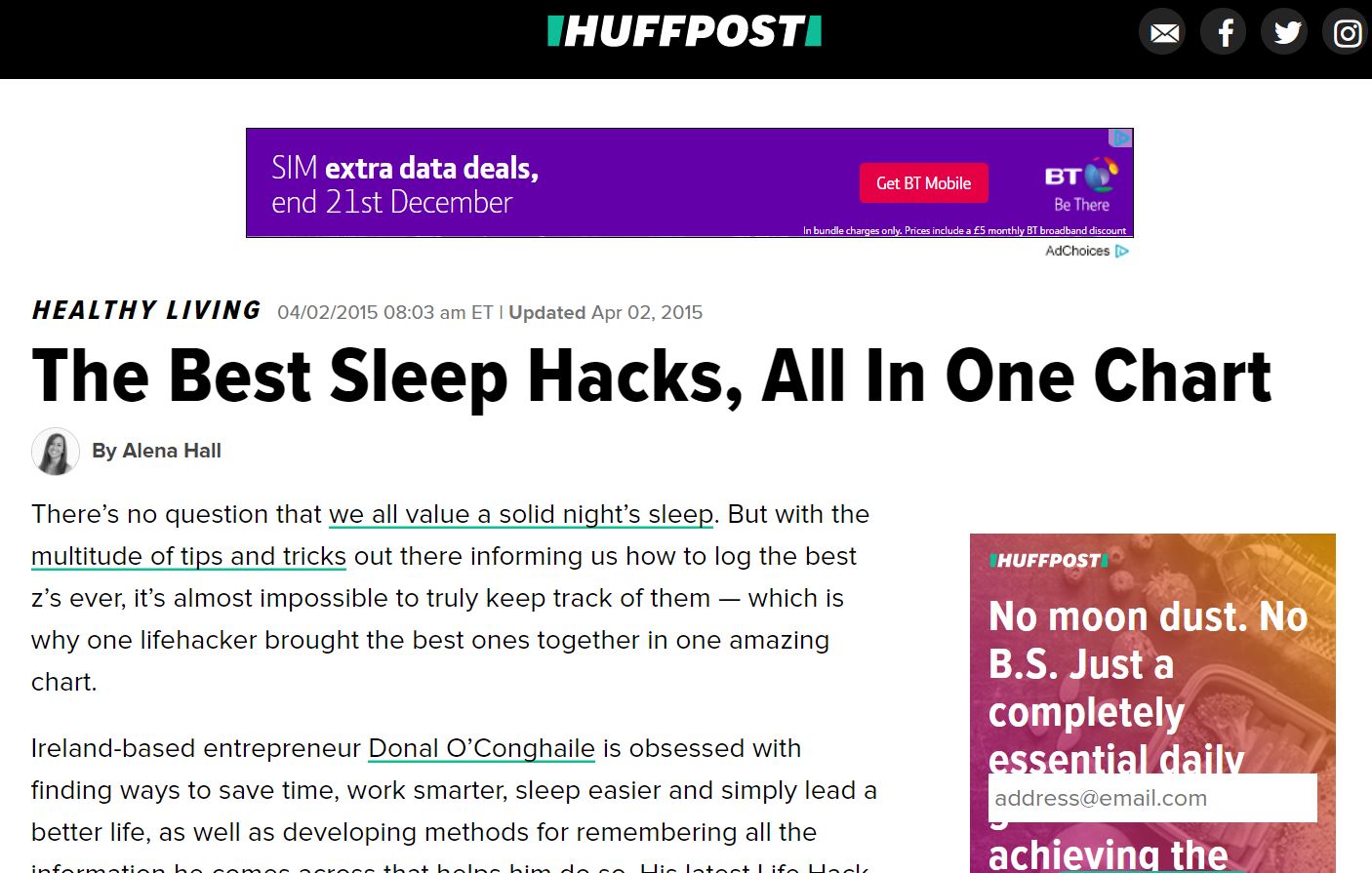 Here’s a run-down of everything I did to promote the store:

I didn’t share the project with my own network of friends and family for a long time. When I think about why I held off on this crucial-yet-easy step, it was a scary feeling to put myself out there with an idea that had lived solely in my head for so long.

I wanted to share what I had been working on, but only when the store was a success. I wanted the glory of showing everybody “here’s a cool thing I did!” I didn’t want them to see the struggle, or show that I needed help. 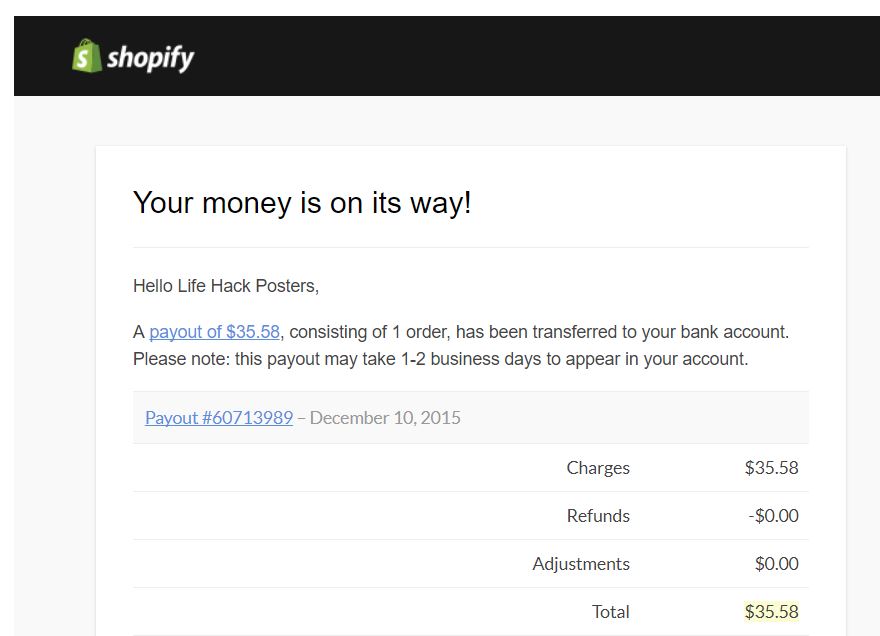 I had 12 individual backers on the Kickstarter project, three of whom were friends and family. The other nine were strangers. As per Kickstarter rules, if you don’t meet your funding goal, you don’t get anything. So all those backers received their money back.

In all truth, the Kickstarter project was purely for promotion. I didn’t need to raise money to make the posters. I invested my own money to create the designs but I would be using on-demand printing—meaning I would have no inventory or supplies to purchase in order to make sales. If an order came in, the printer would fulfil it.

During the time of the Kickstarter project, I was working on creating my online store as a more permanent home for the posters. When it became clear that the I would not reach my funding goal, I launched the store at lifehackposters.com and continued to promote it.

Almost immediately after the Kickstarter closed, I received my first sale in the online store. One of the project backers named Annie really wanted a poster, and she got it. I didn’t go on to make hundreds of sales, but knowing that someone has my poster hanging up somewhere is a really cool feeling. I went on to make four sales in total. There was Annie, two family members, and another sale to someone in Tennessee.

It really is a thrill to see an order come in. Someone spent their own hard-earned money on something I made! That kind of validation feels wonderful, but four sales wasn’t exactly enough to turn a profit.

Looking back, I had tunnel vision where I was so excited by the idea that I was convinced it would work. I should have put it out there sooner. I wish I had asked for feedback from people I trusted to be honest with me, to help me see the risks and weaknesses I was exposing myself to.

“To overcome blind spots, you need friends with gritty courage to tell you the truth. You need to be open to feedback and put your listening ears on.” Source.

Personally, I found it difficult to work on a project like this by myself. I procrastinated quite a bit throughout the process of getting it up and running. I took months to finalize a design, sketch pads just sitting on my table untouched for weeks and weeks. Once things were live, I had more of a fire under me but it took a long time for me to get things going.

After 8 months of the store being public, I stopped working on it. I focused on other things in my life and let the store slide away. I left it up until June 2016 in case it would magically get some traction of its own. But “build it and they will come” doesn’t work when it comes to e-commerce.

In total, I spent $2,300 on the project—mostly on Shopify fees, domain registration, paying the designers, and a few small tests with social media advertising. It wasn’t a massive loss over two years, and I look back on it with a fondness for the lessons I learned.

This venture wasn’t a complete waste. Here’s what I know now:

I think this venture could have turned a profit had I invested more time and money in the marketing side of things. In the end, I believe I lost the heart to keep going, but I’m glad I did it.